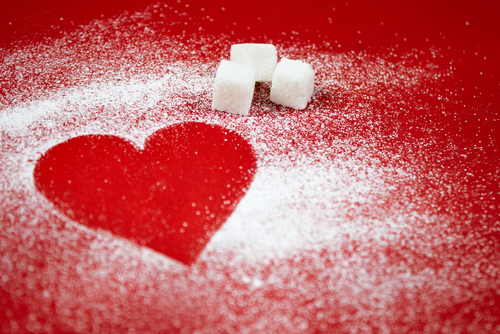 Valentine's Day is almost here. It's a day known for love, romance, candy, and—for many of us—annoyance.

Though greeting-card companies may not believe it, not everyone in the world is in the midst of a perfect relationship full of flowers and sunbeams. Some of us have been (gasp) rejected, no matter how many times we hold up a boom box beneath our beloved's window.

In the interest of stress relief, we've got word lists for this obnoxious occasion, including words for the over-sweet and words for the under-attached. Remember, being alone and/or cynical doesn't mean you have to have a weak vocabulary.

spurn
The meaning of this unromantic word is, as with so many words, more complicated than you'd think. Early uses refer to tripping and stumbling, which smoothly morphed to the sense of kicking something away. This kicky meaning led to a metaphorical use perfectly summed up by the contemporary phrase "kicked to the curb," which means rejected and usually doesn't involve a foot or curb. The Oxford English Dictionary' definition of spurn is strong: "To reject with contempt or disdain; to treat contemptuously; to scorn or despise." Spurning is more likely to come with a sneer than a smile.

syrupy
Maple syrup is pretty good, right? I sure like 'em on my pancakes, unless we're talking Swedish pancakes, in which case I'll stick to lingonberries, thank you. Anyhoo, syrup is good, but imagine this sweet stuff poured out by the gallon, and not just on pancakes, but on pizza, cereal, broccoli, sushi, and anything else you put in your piehole. Even for those with the biggest sweet tooth, this could be a bit much. This is why syrupy, since the 1800s, has been a word for language that's too sweet and sticky. A syrupy love poem, if it doesn't bring a tear to your eye, could inspire an obsessive need to wash your hands of such drippy drivel.

rebuff
A rebuff is a rejection: in particular, a rejection that's not very nice. Rebuffs are blunt and sometimes rude. "I'm not interested in you that way" isn't a rebuff. "You are gross and icky and make me want to bleach my eyeballs" is more of a rebuff. Back in 1947, Charlotte Brontë used the term in Jane Eyre: "All eyes met her with a glance of eager curiosity, and she met all eyes with one of rebuff and coldness." This word has a high wind-chill factor.

mawkish
Some words take a long journey from their original sense—but not mawkish. This word originally referred to things that make you, as George Carlin put it, engage in an involuntary protein spill. Fittingly, this word is related to maggoty, surely one of the barfiest words in the history of this vomitorium of a world. From there, mawkish broadened to subjects that were less horrifying but still disgusting: like overly sweet, sappy treacle. On Valentine's Day, there's mawkishness aplenty.

treacle
Speaking of treacle, this was originally a type of medicine, back in the 1300s when Walgreens was just a guy in an alley named Walter Green. (Note to self: fact-check this.) By the 1600s, the term evolved, referring to sweet, syrupy concoctions such as molasses, which made the figurative meaning of "sentimental twaddle or flattery" a natural.

dump
Even short, simple words like dump have more history than you'd expect. Dump, which has been around since the days of Middle English, originally meant to fall or plunge. Back then, you could dump off a roof and have no one to blame but yourself. As dump slumped through English, it became something you do, like tossing away a bunch of garbage—which ends up in a garbage dump. In the 20th century, dumping broadened even more. In Dale Stivens' 1946 book The Courtship of Uncle Henry, the dating-oriented meaning appeared in sentences that read as accusatory ("You've dumped plenty of fellows before") and indignant ("Dumping me like this for a couple of dumb sailors"). Man, I hate when that happens.

cloying
This word for an overdose of sweetness has a binge-y history. The OED's relevant definition of cloy starts out "To overload with food, so as to cause loathing." You know you've had too much food if you're not only moaning, groaning, and regretting, but loathing. This meaning of cloy has been around since the 1500s, but this use by Thomas De Quincey in 1848 is nicely illustrative: "To be cloyed perpetually is a worse fate than sometimes to stand within the vestibule of starvation." In other words, being overstuffed can be worse than being underfed. As cloy evolved, one of its meanings involved being overfed with sweet things, which inspired the adjective cloying. In The Arizona Republic, Bill Goodykoontz describes recent movie A Dog's Purpose2020欧洲杯时间 as "…often cloying, absurdly melodramatic, and the premise exists largely as a tear-manufacturing device." Emotional manipulation, anyone?

Remember, there's more to Valentine's Day than true love, crushing disappointment, sappy poems, and sugary treats. There are words, which will never break your heart or give you a cavity. So celebrate February 14th by curling up with a box of chocolates, and practice one of these lists: