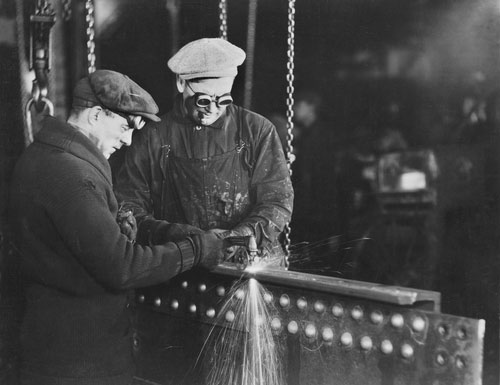 For many, Labor Day and its three-day holiday weekend signal sales, the end of summer and the beginning of the school year.

But that's not all that Labor Day signifies. Labor Day was made an official federal holiday in 1894 to celebrate trade unions, labor movements, and the workers in general. Many states had already been celebrating a Labor Day by this time, but the final push to make it a federal holiday was politically motivated. There had been a strike of the workers of the Pullman Car Company, and some employees were killed as their protests and demonstrations to obstruct the trains were broken up by the U.S. Army. Six days after the strike, President Cleveland, in an effort to smooth things over with the trade unions, signed the legislation making Labor Day a national holiday. Labor Day is a time to recognize those who toil and who slog through their tasks. Here are some vocabulary words inspired by hard work.

For more vocabulary practice that'll make you feel productive work your way through this list: Words That Put You To Work.

labor
Any manual or physical activity that is not done for fun can be called labor. A labor is a task or a burden that one must accomplish, usually in the course of one's job. In modern times, as fewer people do physical activity as part of their work, a labor has also come to mean anything you don't want to do — anything that is a long, unenjoyable slog can be called a labor. The noun preceded the verb historically, with the former being attested in the 14th Century and the verb not arriving until late 15th century. With so much exertion comes the extension of the verb to mean "to endure pain or suffer," and the pain one associates most closely with the word labor  — the labor of childbirth — is an early application of the verb, pre-dating its general use. The verb is not to be used lightly — you have to be working hard, taking pains, striving, to say you are laboring.

toil
Toil is another hard labor word, and it evokes back-breaking work, primarily of the physical kind. You may have a lot of coding to do at your computer, and you may have to stay up all night and it may be laborious, but it would be a stretch to say that you are "toiling away" except in a comical way. Toil originally referred to a dispute or some kind of turmoil, and even the modern work-related sense retains some of this sense of struggle and tension. Toil comes from the the French toiler which meant "agitate, stir up, entangle, writhe about," and is ultimately from the Latin for hammer, tudes. This etymology effectively communicates how toil can beat you down and exhaust you, until you think you have given everything to your work and there is nothing left inside of you.

slog
Labor, toil and slog all indicate hard work, but slog in particular carries with it a sense of just how difficult, how mind-numbingly awful, that work really is. Slog also has the sense of an extended period of hard work, not just one or two tasks but an extended timeframe where all one does is toil away, in a series a tasks that goes on seemingly forever, with no end in sight. Slog originally referred to "a hard hit", and it's not that big of a linguistic leap from a physical blow to a metaphorical attack by a constant barrage of work tasks.

industrious
2020欧洲杯时间 No word better exemplifies the bright side of labor than this word, which means inventive, resourceful and clever. Industrious comes from the Latin industria "diligence, activity". Being industrious falls under that old slogan of "work smarter, not harder." Industrious people can use the tools at their disposal and find shortcuts to operate more efficiently rather than having to engage in long, drawn out tasks that take forever and leave one exhausted. Industrious people are those who, if alone on a deserted island, find a way to not only survive, but thrive in their new environment. They find the best way to spear fish, build the most comfortable huts possible and attempt to contact help in several different ways. These people are no doubt working hard, but they have also found a better way to work.

diligence
To work with a sense of diligence is to work with care and dedication, and to persevere until the task at hand is complete. To be diligent is to be aware that the work one does is a reflection of themselves, and to take pride in that fact. People are inevitably judged, at least in part, by the work they do, and those who exhibit diligence understand this and want to put forth the best part of who they are in their work. Diligence2020欧洲杯时间 comes from a Latin word that meant "attentive and careful." The sense has evolved in English to include "steady effort." This new sense of the word opens up the possibility that you can be diligent and still not quite succeed. You'll often hear of a "diligent student", which is certainly a compliment, but sometimes even the diligent can fall short of the mark. Think of the diligent math student struggling in trigonometry class, or the music student with no ear who nonetheless practices their tuba everyday. Diligence is an admirable quality, whether one succeeds or not.

Labor Day's three-day weekend is traditionally one of the last moments for quiet reflection before all the routines associated with the school year start resume. It's a time to breathe deeply and relax, on behalf of those who have toiled before you and for yourself, because (hopefully) you've earned it.