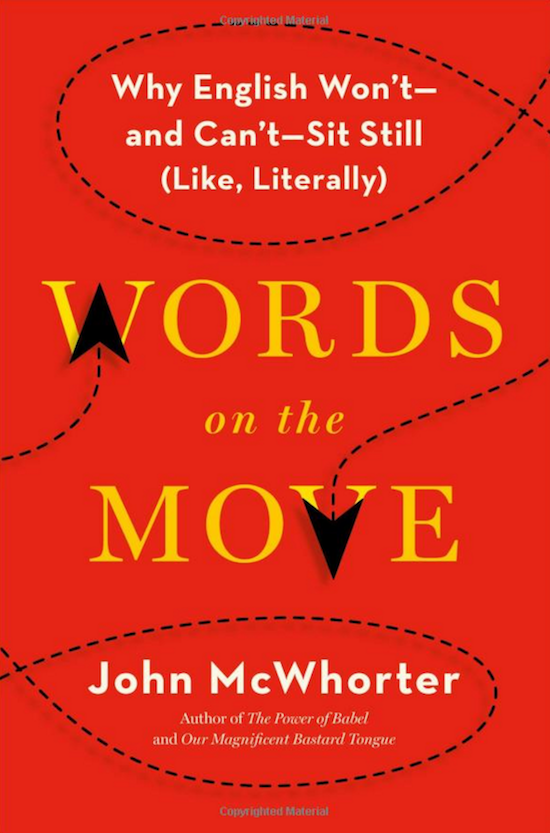 It's mind-boggling that many people who profess to love language have bizarre, backwards ideas about it based on superstition and hokum. Educated folks who mock evolution-deniers have no problem believing equally unsupported ideas about language—such as "English is worse than ever!" and "Words shouldn’t change!"

Though one despairs—particularly in an election year—that anyone is capable of changing their mind about anything, sometimes hope arises. A new hope for a more scientific, educated, and downright uplifting approach to language has reared its beautiful head in the form of John McWhorter's terrific new book . McWhorter makes a persuasive, charming, fact-based argument for the paradoxical constancy of language change. I don't know if this book will put any pet peeves to sleep, but it makes a strong case that the only words that should freak us out are the ones that don't change.

McWhorter, looking at English from a variety of angles, argues for a positive, almost joyous approach to language where change is celebrated rather than reviled. One of his main metaphors is downright celebratory: "Language is a parade: the word whose sound and meaning stays the same over centuries is the exception rather than the rule." Just as a parade has a cheering audience holding frothy beverages, McWhorter encourages readers to see language as a "spectator sport" that's unpredictable and entertaining rather than apocalyptic and unsettling. While looking at meaning creep, vowel shifts, new-word-creation, and plenty of other changes, McWhorter frames language as a Darwinian wonderland.

Much of McWhorter's book deals with words that appear to be verbal trash: the uhs and ums, the you knows and likes, and our old frenemy literally. I understand if you just can't stomach yet another look at literally from any angle, but McWhorter pulls off the single most thoughtful, well-researched take on this pesky word I've ever read, putting it in the context of synonyms such as very and truly. McWhorter truly does a very good of explaining why meaning shift is inevitable and even the most worthless-seeming words (plus emoticons) serve valuable functions in communication. McWhorter's scientific approach to lexical rubbish finds an apt comparison in another science: "Just as geneticists are learning that ever more of what has been dismissed as 'junk' DNA has purpose, a great deal of what feels like trash in English is part of how the language gets basic work done." This book is an expert guide to how that work works.

McWhorter also spotlights the role of chance in language change, which is sure to jangle the nerves of readers who demand everything in the cosmos have a reason. Many people don't like to acknowledge the role of chance in their language or lives: they want to believe their loved ones, jobs, and dictionaries are the result of God's plan or at least Odin's ravens. But while language evolution is natural and inevitable, the details are unpredictable and random. Words split and spawn in ways that aren't remotely logical. As McWhorter notes, the logical way to break down the word alcoholic would be alcohol and ic. But thanks to a roll of the evolutionary dice, we also have -holic, an extremely prolific suffix covering everyone from chocoholics to Trekaholics. As with other elements of language change, McWhorter reframes chance as an area for delight rather than dread. John Cage would approve.

McWhorter discusses a dizzying range of words that have morphed and mutated to fit our needs and impulses. You might be familiar with some of these shifts, but I doubt anyone knows them all. I was surprised to discover that hound preceded dog as the primary word for our canine buddies. As a dog person, I was delighted by this knowledge. On the other paw, vowels bore me for some reason, so I zoned out a bit during the section on vowel shifts. However, I am a rabid fan of compounds and portmanteaus, so I came to life during the chapter "Lexical Springtime: Words Mate and Reproduce." Fortunately, whatever the specifics, McWhorter is a strong writer. His thinking and scholarship are impeccable, and his sentences smooth and propulsive. This is at once an easy and in-depth read.

The argument of the book is powerful, coherent, irresistible, and downright inspiring. I'm jealous I didn't think of it myself. McWhorter has written a wonderful book that could genuinely transform the perceptions of readers with an open mind and substantially enlighten readers who already have a scientific bent. I'm going to cite McWhorter the next time I hear some word "isn't a word" or that a simple meaning shift is a harbinger of the end times. McWhorter is a mensch for showing us that if we ever found a word that remained frozen through the centuries, like Han Solo in carbonite, that is the word we should find unnatural and unnerving. Change is the norm, not the aberration, which is, like, a pretty good life lesson as well.